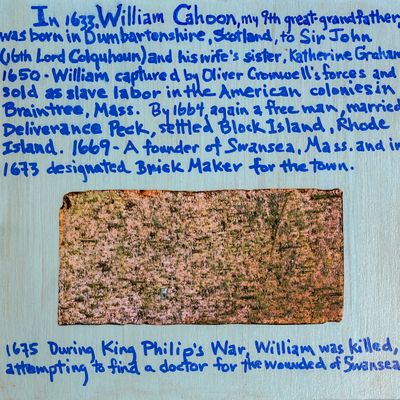 In 1633, my ninth great-grandfather, William Colquhoun, was born in Dumbartonshire, Scotland.

In 1650, William was captured by Oliver Cromwell‘s forces in the Battle of Dunbar in south eastern Scotland and sold as slave labor to Bex and Co., Liverpool, England.

William was shipped aboard the ‘Unity’ to the American colonies, where in 1651, he was re-sold in Braintree, Massachusetts.

William again became a freeman in 1660, after the restoration of Charles II as King of England, Scotland and Ireland, who decreed that all captured royalists be discharged from their servitude.

After being one of the founders of Swansea, Massachusetts in 1669, William was designated as the town’s Brick Maker in 1673, represented by the brick in the middle of the panel.

During King Philip’s War in 1675, William was killed while out attempting to find a doctor for the wounded of Swansea.

William and Deliverance had nine children.

Their descendants live all across the USA and have many variations on the surname, some of the most common being, Cahoon, Cahoone, Calhoun, Cohoon, Colhoon, and Colquhoun.