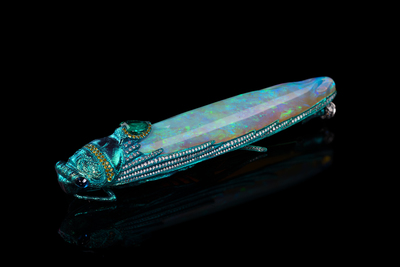 The Emblem of Zen

Cicadas and Zen share the same pronunciation in Chinese, and they also represent a similar way of life. Cicadas spend their youths underground, sheltered from their predators, before emerging to the surface completely transformed and endowed with delicate, membranous wings.

The prolonged years of a cicada’s underground life are a time of serenity, free of disturbance, much akin to the meditation period that is a crucial component in one’s path to enlightenment. It is the behind-the-scenes effort often overlooked that ultimately contributes to every success; and if Zen is to be likened to cicadas, it would be in this modest and inconspicuous state of theirs that Zen is best manifested.

The creator captures the cicada’s most Zen form – not the one in which its body is elevated off the ground and its wings flutter freely about, but that in which its wings are, albeit retracted, sheltered and evolving, and as indestructible as diamonds; in which its eyes of sapphires patiently gather intelligence and signify willful detachment from the earthly, and in which its lengthened beak can dig even deeper into its surrounding yellow diamonds that symbolize the yellow soil from which knowledge and wisdom are gently extracted and absorbed. In this Zen state of being, the body interacts with the moist greenness of nature, and the heart turns into emerald which embraces nature’s most lustrous and lively color.

Being underground, cicadas also undergo metamorphosis, which the ancient Chinese found inexplicably fascinating. They believed that cicadas, being able to undergo a change in form, were related to resurrection. Such enchantment is symbolized by the opal that is the cicada’s body, given the universe of colors the opal physically embodies. What is more, the opal featured in this creation was not formed from silica as was most opal, but rather from the squid-like creatures called Belemnites that went extinct millions of years ago. In a way, then, this creation is a testament to the validity of rebirth and a resurrected product of the dinosaur era.

The Keeper of Time
HOME