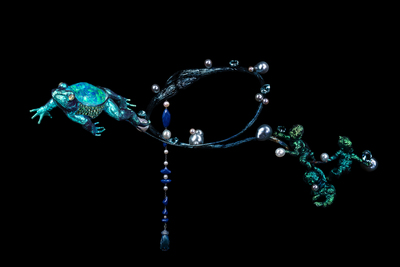 Wallace’s Flying Frog was named after Alfred R. Wallace, the biologist who collected its first specimen to be formally identified. Long limbs, colorful skin, and the fact that it parachutes make it a wonder to nature lovers. When it glides from a tree branch to a leaf’s top, it embodies the beautiful possibilities that even frogs can fly – the magic of evolution.

Wallace Chan created his version of Flying Frog – a frog captured in motion, as if it were swimming in the sky. Is it in the air or under water? Or, does it matter? In this neck-piece, a playful and surreal moment is enlivened through the different kinds of blue and texture brought about by blue topaz, lapis lazuli, aquamarine, opal, titanium and The Wallace Chan Porcelain.

The frog carries his home on its back, an opal of changing colors, the perfect stone to symbolize the underwater world. At a distance, we see three children enchanted by the frog. Each of the children is a little Wallace, the carvings that abstract their face and body hint that they live in the subconscious, the back of his mind. When the creator was a child, chasing frogs was fun. Whenever he saw a frog, he would run after it – just to find that the moment he approached, the frog would jump away. Today, this childhood story can be interpreted as an allegory for his creative process. The frog is the ideal, the magic, and the dream, and it always goes away, as soon as the creator is close enough to get a glimpse – but there is also always something real that is left behind by each chase. To convey the elements of truth in a dream, carving strokes are shown on the pieces of blue porcelain cascading down.

In ancient cultures, the frog symbolizes energy, birth and rebirth. It lays the pearls of life. In fairy tales, it is a noble prince, spell-bound, waiting to be freed by true love. In a child’s mind, it is excitement, freedom, fun and curiosity.

The Keeper of Time
HOME