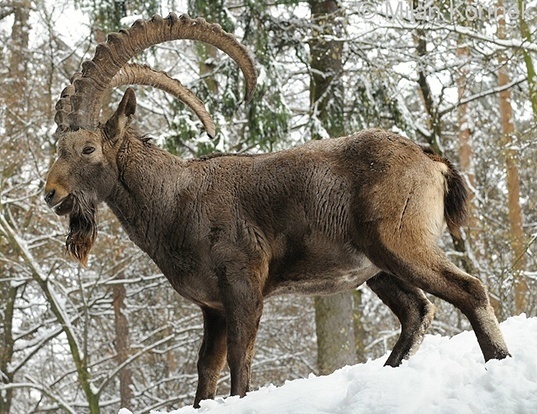 Essentially large, muscular goats, Siberian Ibexes can be found living throughout much of Central Asia from the Altai Mountains to regions of western China. Like other members of the goat family, they are notable for their strange, horizontally elongated pupils, horns and beards dangling off their faces. However, Ibexes stand out for their heavier build, with large muscular necks, and their impressive, curved horns. Their curled back horns are notable for the rings around them, which build up through age and can be used to tell how old one is.

Ibexes spend their days staying cool at higher elevations, often found idly standing in awkward positions on steep slopes. They will descend to lower elevations to forage for sparse herbs and grasses. On very rare occasions, Ibexes will travel all the way down to forestland, but never venture beyond the tree line for fear of predators. Elusive even amongst their own kind, they usually only congregate in small, same-sex herds, except during mating season when large gatherings occur. Humans rarely see Ibexes, and even their natural predators have trouble reaching them, with only the most agile felines and canines like Snow Leopards or Wolves able to gain access.