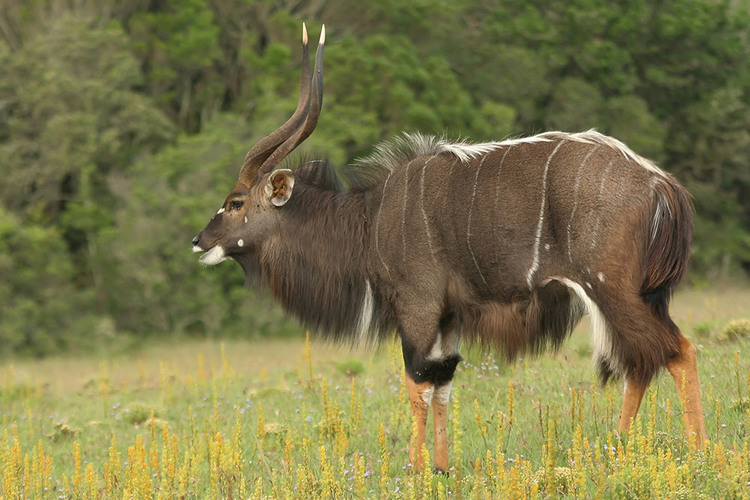 Nyalas are a species of antelope that can be found living in the southern regions of Africa. Males of the species are noted for their very particular appearance when fully grown. They possess small heads and large, well built bodies that can weigh up to 300 lbs. More notable are their accented features, which include yellowish legs that stand out against their brown fir, as well as their inwardly spiraled horns, which themselves possess yellow tips. Nyala are also known for their white stripes of fir, one of which appears on their noses, and others as an array of streaks along their torso. They are noted as a particularly sexually dimorphic species, which means males and females look drastically different. Females are significantly smaller, lighter in color and have no horns, but still bare many of the white accents previously discussed.

Nyala’s unique appearances have made them a particular favorite among hunters, who seek them as trophy mounts. Those you see here are what you might call still maturing, with their size and short fir suggesting they still had a little way to go before being fully developed. While poaching of the Nyala has sometimes been a problem, with the species even going extinct in Swaziland before being subsequently reintroduced, today they are seen as a fairly stable species. This is largely due to the fact that they mate throughout the year and females reach maturity in only 11 months, enabling them to rapidly reproduce. They are also nonterritorial between herds, meaning that members of different herds can contribute to each other’s population.