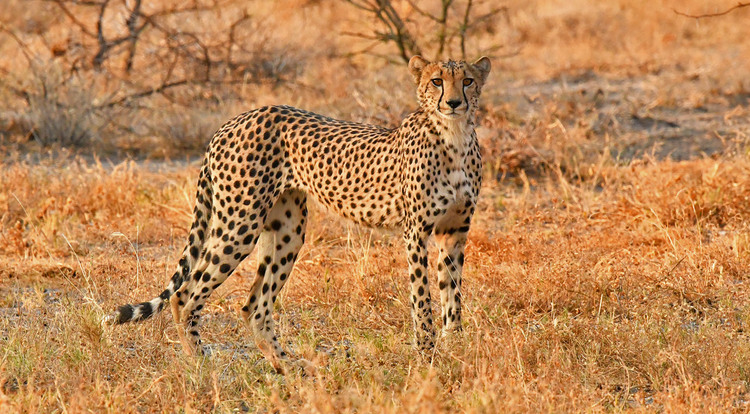 An iconic animal of the cat family, Cheetahs can be found stalking a wide variety of landscapes. They are best suited to lowlands where their incredible speed is of greatest advantage, but have proven able to succeed on mountains as well, leaping to catch prey. Cheetahs can be found widely throughout Africa, making them something of a signature animal of the continent. However, they actually have a much more widely dispersed biome, with a Eurasian variety living in Iran and formerly as far as Burma. This large environmental range has given rise to a number of sub-species which bear slightly different looks. Each possess their familiarly long, lean bodies and spotted fir pattern in common, but some, such as the Asiatic Cheetah, have a more muscular build, while those like the Northwest African Cheetah are exceedingly thin.

The most notable fact about the Cheetah is that they are the fastest land animal on Earth, able to run an incredible 60 mph in only three seconds, with a maximum speed of 80 mph. Their much lighter forms set them apart from other large cats, who typically overpower their pray with greater muscle mass. Cheetahs instead act as efficiently as possible, outrunning their pray, then biting their necks to suffocate them, making their way of hunting much more efficient. In fact, it is because of these differences that they are not technically a part of the big cat family of Pantheras, much like Cougars, and are even much more genetically related to that previously examined species.