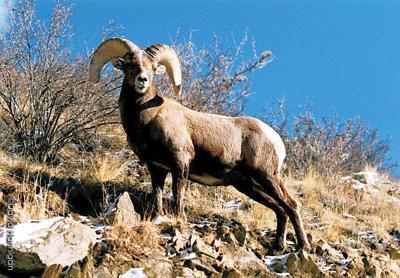 Found in isolated pockets of cool, mountainous regions throughout North America, the Bighorn Sheep is a somewhat elusive creature. On a chance encounter, one is inevitably struck by their signature horns, from which they derive their name. Male members of the species, such as the one preserved here, possess large, curled horns that can weigh up to an incredible 30 pounds. With some Rocky Mountain Bighorns weighing around 500 pounds, they stand out as some of the largest species of sheep in the animal kingdom.

One reason they came to be known by their horns, apart from their impressive size, is their reputation for using them to great effect as a weapon. Bighorns are known to ram foes with extreme force, charging forward at speeds around 20 miles per hour. The impact from such blows are so hard that the species has actually adapted skulls specifically for the task, possessing greater thickness in several areas typically prone to fracture in other animals. Bighorns regularly compete with one another by butting heads to establish dominance as well, training their headbutting skills even further. All of this combines to make Bighorn Sheep prime contenders for having the strongest headbutts on the planet.