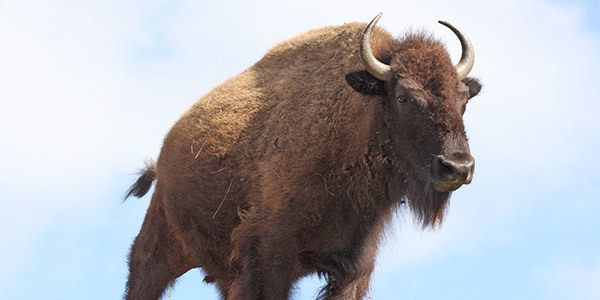 Named our national mammal in 2016, the American Bison stands tall as the largest of that category on the continent. Their massive brown forms often come as large as six feet tall on all fours, and a full ton at 2,000 pounds. While once Bison could be found throughout much of North America, they are now typically found in pockets of grassland set aside as preserves for them. It is estimated that out of the near half-million Bison believed to exist, only around 3% live in the wild. Oklahomans are lucky enough to live in a rare area where Bison can be called common.

Historically, Bison have been useful to man as a major source of food and various other products. Their massive size provides a great deal of meat, and thick, shaggy fir makes for excellent clothing, which is why many Native peoples held them to be a major fixture of their culture. Throughout the plains, tribes once chased Bison on foot, cornering them and driving them off cliffs en mass in their confusion. After the Columbian Exchange, horses were introduced to the continent, accelerating the hunt for Bison by all parties to the point that they became posterchildren for the endangered species list. It was only though the cooperation of the government, native tribes and environmental groups that the Bison population has been revived, ensuring their survival for ages to come.