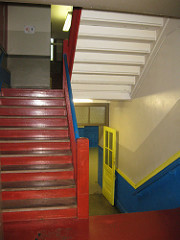 The basement consists of several rooms -.

The girls and boys restrooms -.

A storage room and an under stair storage area -.

The kitchen, and  the cafeteria -.

The janitors office, and the boiler room -.

REM pod activity and K 2 hits are reported in the basement corridor, and the South stairwell near the boys restroom - .

Footsteps and shuffling have also been reported in this stairwell -.

A shadow figure has been sighted in the main basement area, just outside the custodians door -.