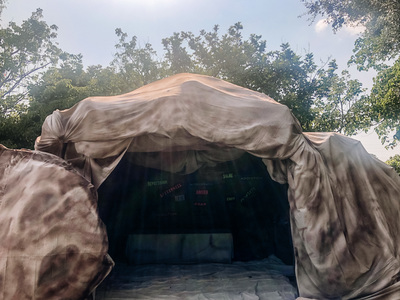 His body was there just yesterday. You saw the large stone yourself, blocking the entrance with guards standing on either side. But today, this third day, the stone is rolled back and there is nothing left inside but the linens that his body had been wrapped in.

Take a closer look. That’s not all that was left behind. Just three days ago you chose JESUS! By choosing him, you allowed him to take on your sins, your past, and your old selfish ways. It all died with him on the cross that day, was buried, and is now left behind in that empty tomb.

But today, He is Risen! Just like he said! And His resurrection is your resurrection. All shame, regret, anger, unforgiveness and fear is gone! You leave the tomb, recognizing that there is nothing left for you there. You have a new life, a new identity in Christ Jesus. Who you were before is gone forever! Who He says you are, who He designed you to be, that's what remains.

“Fear Not! for I have redeemed you; I have called you by name; you are Mine.”

Prev Next
Encounter the Messiah: FEAR NOT!
HOME