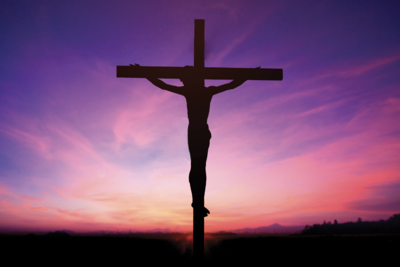 You followed Jesus up the hill to the place called Calvary. As you watched him agonize over each step, you began thinking back over your time with him; the way he spoke with such wisdom and love, the people that he healed and other miracles that he did right there in front of you; the way he knew you, really knew you, with all your faults, and yet he still invited you to come with him. Why didn’t you stand up for him today? By remaining silent you too became an accomplice, siding with the mob calling out to, “Crucify Him!”

As you follow him up the hill, you see him look back to you with such longing. You finally find your voice and call out, “Lord Jesus, I choose you! I no longer want to walk in fear, live with this shame, do things my own way! Is it too late?”

They nail Jesus to the cross and raise it up. You can't bear to look at him, knowing the part that you played; knowing that your sin, your choices put him there. After several hours, just before taking his last breath, Jesus looks to the heavens and says, “Father, forgive them, for they do not know what they do.”

It wasn’t too late!

Jesus died on the cross that day. An exchange was made: your sin for his perfection. God loves you so much that he could not bear to be separated from you. He made a way through his perfect son, Jesus. Do you believe this? Barabbas believed in his own way. Even at your best, you know your motives are impure and your actions are self-serving. Will you surrender today and fully accept the great exchange before you?

Prev Next
Encounter the Messiah: FEAR NOT!
HOME