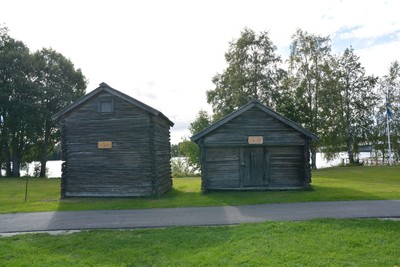 On the left you will see three small barns. The first is a food barn. The foodbarn was timbered in 1816 in Storbrannbodarna to store food for horses but was later moved to Muråsfäbodarna to be used for storage. In 1959 the foodbarn was moved to the outdoor museum and is now used as a playhouse for younger visitors. The next two barns are from the 1700's. These two storage cabins were next to each other above Gärdevägen but located on two separate farms. The larger one was used as a grain magazine and the smaller one was called, according to protocol,  "järnhäbbärjet" a name which indicates that in it the raw materials for the blacksmiths who worked at each farmhouse were stored. They were moved down to the outdoor museum in 1986.