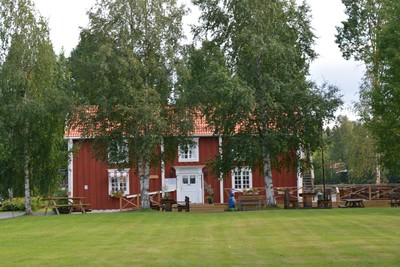 As you come to the junction of the paths you might want to take a coffee break. Or as it is said in Swedish, a fika. Café Tomten was known before as the "Aunt Elise-farm" which was located on Storgatan, about where the town hall is today. The building is an 18th century house and was once the main building of a large farmhouse up in Gärde. The house was moved to Storgatan in the 1950s to become a home and business space for Aunt Elises’ parents.The building is best known as a café and eventually got the name Tomten (Santa Claus), the reason why is unknown. The house was moved to the outdoor museum in 1958. Café Tomten is well-attended and open during the summer.

Now take the path that runs parallel to the lake.