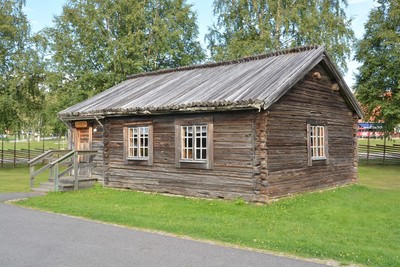 The the tax collector or parish administrator’s cabin is the first house that you pass by while walking through the large entrance. It is a log cabin from the first half of the 18th century and is possibly the oldest building in the municipality. It was the predecessor to today’s municipality’s administrative headquarters, it was also the home for the local tax collector and his often quite big family. The EFS (an independent branch of the Swedish church) donated the cabin to the outdoor  history museum and it was placed on the associations first property found in Gärde. In 1981 the cabin was again relocated to today's outdoor museum.

Now look to the building on your right. Here you will find a storehouse that comes from an old farmhouse in Mullnäset in Hammerdal. The storehouse is from the middle of the 19th century and was used as a storage facility for grain, meat and more. Holmen's AB donated it and the storehouse was moved to the outdoor museum in 1958. According to local tradition, King Charles XV, while he was still a prince, spent the night in the storage cabin during one of his travels in the province.

Continue on the path past the office building.