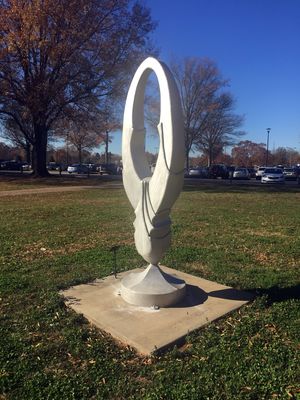 Annulus is a large, aluminum sculpture designed in 2010 by sculptor Scott Strader. As of 2018, it has become a part of the University of South Carolina Upstate’s permanent sculpture collection. It, along with another one of Strader’s works titled Tear of Illian, are on display between the John C. Stockwell Administration Building and the campus library. Through its unique, exaggerated form and explorative creation process, Annulus represents two broad concepts: one of love, commitment, and promises; and another of learning, experimentation and personal growth.

The overall form of Annulus is a somewhat abstracted, elongated wedding ring mounted upside-down on a round base. Rather than being one large, continuous form, Annulus has multiple, interconnecting layers that are placed on top of one another. This is most prominently exhibited in the middle of the sculpture where three overlapping, triangular layers can be seen connecting the ring with the base. While the sculpture does have various edges, none are pointed or sharp, which makes the entire sculpture appear very soft, rounded, and tranquil. As a result of its consistent, symmetrical design and monochromatic silver color scheme, the sculpture also exhibits an essence of elegance and stability.

Due to the sculpture’s form being based upon the shape of a wedding ring, many viewers will likely associate the work with love, commitment, or promises, as these are all common associations with the concept of engagement and marriage. Stylistically, the piece shares various qualities with minimalism, as both Annulus and minimalist sculptures utilize industrial materials and processes. It also shares qualities with minimalism conceptually, as Scott Strader stated that his work contains no deeper meaning, and simply is what it is (Strader, Phone Interview). Minimalist sculpture, similarly, does not attempt to imbue any sense of emotion or meaning within the viewer. However, it is also distinctly different from minimalist sculpture, as it has many organic qualities and a somewhat recognizable form.

As with all of Strader’s sculptures, the creation of Annulus was very process oriented. As Strader explained in an interview about Annulus and Tears of Illian, each of his sculptures are a result of a particular learning experience that he has encountered throughout his journey as a sculptor.

While Annulus was not designed specifically with USC Upstate’s campus in mind, Strader thinks that it makes a great home for the piece. According to The Union Times, “when USC Upstate agreed to co-host the annual Tri-State Sculpture conference held at Converse College in the fall of 2018”, Strader loaned three of his sculptures, including Annulus to the campus (“Tear of Illian”). He really enjoyed how the sculpture looked at the campus and ultimately decided to allow the sculpture to remain there permanently. Considering that Annulus is a result of a unique learning experience, a college campus where students come to learn and grow feels like a perfect location conceptually.

This concept of learning and personal growth can also be tied back to the sculpture’s other main concept: love and commitment. Love and marriage are a way for individuals to learn and grow both from and with one another. Similarly, going through the process of learning and working towards a particular major at college takes a great deal of commitment, as does the act of marriage. Through its form and subject matter, Annulus radiates a plethora of positive feelings and emotions, including stability, exploration, and tranquility. The students of USC Upstate, along with everyone else who views the sculpture, will be able to see Annulus as a beacon of hope, as well as a reminder of the many positive aspects of life in general.