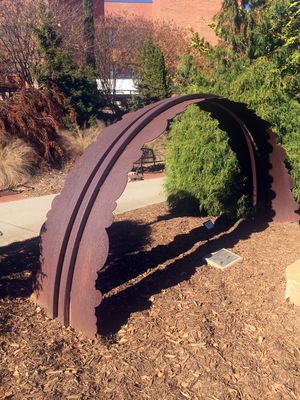 The sculpture you see in front of you is Daingerfield Lewis Ashton’s Arch.  It is found near the Performing Arts Center quad. This metallic structure comes out of from the ground on one side of the garden and extends to the other end.. The jagged edges on the arch feel sharp when you put your hand on its surface. You may be thinking to yourself “Why is there an arch in the middle of the quad, and what purpose does it serve in relation to the school”?  In order to answer these questions, we must first investigate the background of Daingerfield Lewis Ashton and the symbolism of arches in art.  After the investigation, it will be evident that an arch is a powerful tool to force the viewer to look within themselves and how they deal with change around them.

Daingerfield Lewis Ashton attended the School of Art at the Richmond Professional Institute in the 1960’s. He would later live as a vagabond artist and hippie in the San Francisco area during the latter half of 1960’s and early 1970’s. He made a lot of art pieces during the last 40 years of his life. His art included drawings, block prints, lithographs, pottery, sculptures, jewelry, and photographs.

When you see this arch in front of you, does it remind of you of something like a gate or doorway? Well, that is exactly what it symbolizes. An arch is a gateway – a door to something beyond it – a passageway to something more to follow. It symbolizes strength and support while providing a threshold to change.

You may be thinking this still doesn’t answer my questions about Ashton’s Arch. That is because the context of this arch is different from Robert Serra’s Tilted Arc. Robert Serra’s Tilled Arc is 120 feet long by 12-foot-high curved steel structure that was constructed in the middle of Federal Plaza in Chicago, Illinois. Serra wanted the viewer to experience the sculpture in a physical way and this is achieved by how the structure tries to encompass the people who are in the plaza with its volume.

Both of these works tries to compasses it audience with their form and size. Daingerfield Lewis Ashton’s Arch is jagged on it edges, and smaller, while  Robert Serra’s Tilted Arc is cleanly cut on it edges and is much bigger in size.  The form on Ashton’s Arch is organic  while the form of Serra’s arch is geometric resembling a large rectangle that is distorted.  The purpose of Serra’s Tilted Arc was to critique the area, it was in, while the meaning of Ashton’s Arch is left to the viewer. One could say Ashton’s Arch is reflective of how he grew from an inexperienced artist from the 1960’s to his teaching position in the 21st century. Another person could say it relates to the viewer in the way they grew up.

Daingerfield Lewis Ashton’s Arch is an interesting sculpture. The meaning of the arch is left to for the viewer to interpret. The arch sculpture could be considered to have no meaning, but makes the viewer reflect upon themselves and the changes they face in the environment in which they reside.