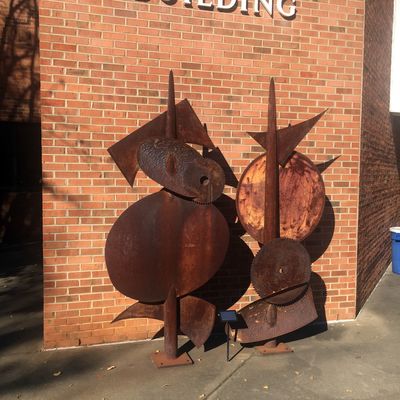 "Red Sails" is one of many sculptures at the University of South Carolina Upstate which is cubist in aesthetic.  The sculpture is 7 ft tall, and is made of old rusted steel, designed and created by artist Dan Millspaugh.  Dan Millspaugh is a Florida native and noted sculptor.  He is the UNC Asheville associate professor of art, who also holds a bachelor of fine arts in ceramics and a master of fine arts in sculpture from the University of Miami.

Dan Millspaugh is most well-known for his works in large metal sculptures crafted from new and reclaimed materials, such as the rusted metal seen in this sculpture.  His works are on display in numerous corporate, public and private collections throughout the United States, including the city of Asheville, Wright-Patterson Air Force Base in Ohio, and the UNC Botanical Garden in Chapel Hill.

Perhaps the most interesting aspect of this sculpture besides the rustic rusted metal, are the two incorporated circular saw blades which draw the eye in when viewing this large and intriguing piece. The artist saying of “If you can’t make it big, make it red” is followed two-fold with this long sculpture and the beautiful rust red colors of the aged metal.

The pole on the right has an almost pill shaped piece of metal on the bottom with another large, rusted saw blade cutting into it, welded to the pole.  Above this is a large circle behind the pole which is a copper color.  Above this circle at the top is a triangle shape welded behind the top of the pole.  These pointed and jagged edges evoke a feeling of power and danger with the sheer size, and the blades pointing out.  This is not a sculpture you want to accidentally run into, and thankfully it is safely tucked against the Horace C. Smith building and safely away from the traffic flow of people passing by

The poles are the same as the mast of a sailboat, which the sails would be connected to with ropes, and the flat pieces of metal are like the sails, making beautiful shapes in the wind.  The lowest sickle shaped piece on the bottom of the left pole is in the shape of the largest sail on a boat, known as the Mainsail, and the top piece on the right pole is in the shape of the small sail on a boat, known as the Jib.  The oval shaped piece with one flat side at the bottom right is the shape of a rudder.  The inclusion of the saw blades may be in reference to the construction of the boat itself, as saw blades are used to cut wood in the making of sailboats, however they may also be a reference to cutting through the water and waves of a storm, as in sailing if the boat is parallel to large waves it can capsize.

The title "Red Sails" is relative in the history of sailing in a few different ways.  The rusted red color goes back to a process using “Tanbark,” a tannin rich dye and preservative on older sails which was a preventative of mildew and rot in canvas and cotton sails from the constant moisture they would endure on the ocean.  Modern synthetic sail cloth is much stronger and does not rot or mildew so easily.  This tanning process has been eliminated in modern day culture when it comes to treating the sail cloth for new boats.

There is also an old saying in the sailor’s world, in regards to red skies and the weather on the ocean for sailing.  "Red sky in morning, sailor's take warning.  Red sky at night, sailor's delight!"   A morning sky that is a deep, fiery red can indicate that there is high water content in the atmosphere, and that perhaps storms are on the rise.  When we see a red sky at night, this means that the setting sun is sending its light through a high concentration of dust particles. This usually indicates high pressure and stable air coming in from the west. This red sunset is a sign for sailors that good weather will follow.

This reference to red sky used by sailors is a common theme in literature and art.  In the famous Haniel Long poem, “Dead Men Tell No Tales”, the beginning verse of the poem starts out, “They say that dead men tell no tales!  Except of barges with red sails.”   It is also mentioned in the Bible, in the book of Matthew, and by William Shakespeare in his play, “Venus and Adonis.”

The light from such sunrises and sunsets often gives white sails a red appearance, and depending on the context of the red sails, evoked either by a red sunrise or red sunset, can be a good or bad omen.  Which do you think is true for these rusted Red Sails?