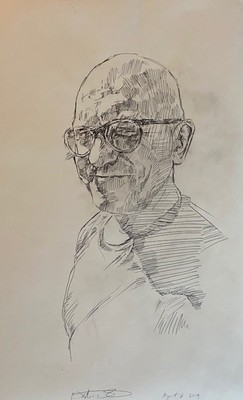 “You’re not a politician, a public health official or an activist, you're an artist. As an artist you have a very specific responsibility: to live the most genuine and liberated life of which you are capable and to make your work as direct a reflection of it as you are able.”     Dr. Ayman El-Mohandes, 2017
My public work is project-based and continually re-invented, relying on a handful of core tenets: That wherever I work makes possible something that could be made no where else and finding it is the result of the process of the work, that every transformative experience I have had involved someone with authority and power unexpectedly giving it away, that everyone who participates in the process at any step must receive unexpectedly more than they anticipated, that organizational partners must receive something tangible that they could receive no other way than by the participation in my projects, that every conversation I have is meaningful, that meaningful impact is created by thoughtfully crafting every step, that everyone possesses astounding thoughts and that my job is to listen intensely when they reveal them to me, regardless of who they are and how old they may be. I value the individual experience of people more than the validation of big ideas. I understand my audience for each of these projects in layers, as participants, as community members or more distant viewers and feel separate responsibilities to each. Every project is designed to be genuine, sincere and overwhelmingly positive while also eagerly embracing the content that is driven by my collaborative partners and real social needs.
Beginning in 2017, 100 People involves identifying and collaborating with 100 artists and social advocates in Omaha Nebraska to create a portrait of each model, to produce a 2’x1’ woodcut, which is then digitally enlarged and printed as 8’x4’ murals and installed throughout the city of Omaha. Each mural is mounted permanently upon the building of a private owner who has signed an MOU pledging to keep the mural for a minimum of 10 years, contributing to a network of advocates for the progressive ideas within the murals and their advocates work.
In short, 100 people strives to create change in Omaha Nebraska by the collective impact of publicly honoring 100 social advocates in public art murals, organically building support by making visible a network of 100 building owners throughout the city whose buildings will host these murals for at least the next decade. In addition, the group of artists, nonprofit leaders, scientists and donors who participate who gain publicity, mentorship or opportunity through their highlighted participation.