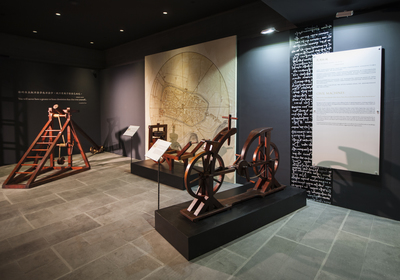 The discovery of this drawing among Leonardo’s papers has raised much controversy.

Between 1966 and 1969, the monks of the "Laboratorio di Restauro" of the Abbey of Grottaferrata, near Rome, were entrusted with the restoration of the Codex Atlanticus. A binding contract was drawn up with the fundamental clause of this contract being that absolutely no person was to be admitted to see the folios of the Codex during the years of the restoration.

During the process of the restoration, the monks separated two sheets that a sixteenth-century conservator, Pompeo Leoni, had folded in half and glued together. The separation of these two sheets revealed some scurrilous scribbles and the rough sketch of a vehicle resembling a bicycle. Some scholars believe that it might have been drawn by one of Leonardo’s young pupils, Salai. The style is certainly in keeping with many of Leonardo’s sketches, and Leonardo did draw a transmission system with a chain with square shaped teeth, which is familiar to bicycle users today.