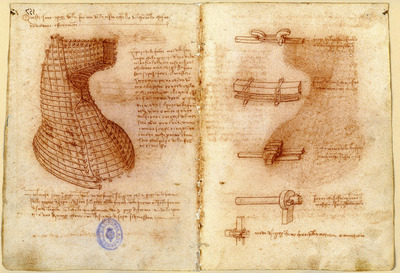 Twenty-three feet high and weighing nearly 80 tons, a giant bronze sculpture of the late Duke of Milan on horseback proved a challenge for Leonardo, never to be completed. At first Leonardo was commissioned to make only a life-sized statue, already a difficult task; but his employer, Ludovico Sforza, then decided that the sculpture, a tribute to his father, should be four times larger than the height of a man. For years Leonardo studied the movement of horses, making countless sketches, and devising new casting techniques. Alas, by the time the French invaded Milan and deposed the Duke, Leonardo had succeeded only in making a 22-foot clay model, which the French soldiers used for target practice and destroyed.