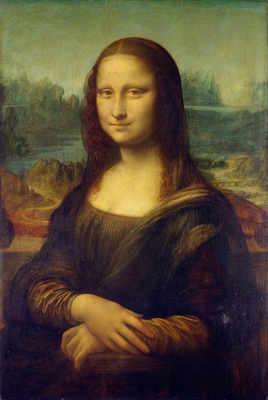 Da Vinci's Mona Lisa is probably the most famous portrait ever painted. In Leonardo’s eyes it was never completed. The mysterious smile of the subject, a young Italian woman named Lisa del Giocondo, has fascinated countless viewers. He began work on the Mona Lisa in 1503. It was probably his favorite piece as he kept it with him at all times, and did not travel without it. In fact, it was the only painting he possessed at the time of his death. Thousands of people see it each year in the Louvre in Paris, perhaps drawing their own interpretation on what is known as the Mona Lisa's most famous and enigmatic feature – her smile. In that era, the slight opening of the lips at the corners of the mouth was considered a sign of elegance. Thus Mona Lisa has that slight smile pervading the whole painting. To achieve this effect, Leonardo used the sfumatotechnique, a gradual dissolving of the forms themselves, continuous interaction between light and shade and an uncertain sense of the time of day. From the beginning, the painting was greatly admired and much copied, and it came to be considered the prototype of the Renaissanceportrait. It became even more famous in 1911, when it was stolen from the Louvre, being rediscovered in a hotel in Florence two years later.