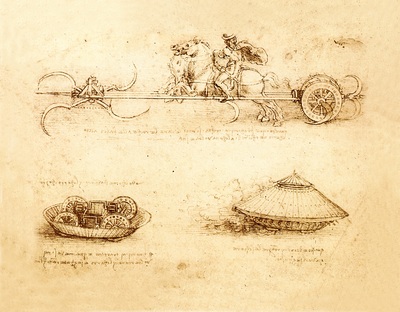 Leonardo had to grapple throughout his life with a deep personal clash of values. He was a pacifist by nature, but in his need to earn a living and support his workshop and apprentices, Leonardo had to accept commissions which paid! During each of these periods Leonardo designed many of his machines of war. As a pacifist this did not sit well with him, but he was also pragmatic enough to realize he required money to pursue his true passion – his scientific research and designs. His military designs were not conventional for the time; in fact, they would have revolutionized warfare had they all been actually commissioned and built. The tank, machine gun, long-range missile launches (modified cannons and catapults) and chariots were all designed to inflict maximum injury to the enemy, but at the same time preserve and protect the users.