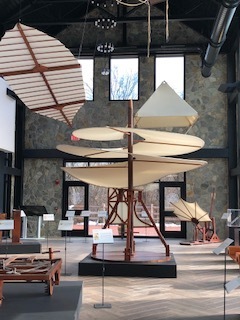 Leonardo's parachute consists of sealed linen cloth held open by a pyramid of wooden poles. In his notebook he remarks that with such a device anyone can jump from any height without injury. The absence of a harness suggests otherwise, but tests at the time would have been limited to trees, towers and cliffs.

Skydiver Adrian Nicholas tested Leonardo's design, jumping from a hot-air balloon at 9800 feet. He found the ride to be smoother than the modern parachute. However, weighing over 90 kg, it put the parachutist in danger of injury on landing.