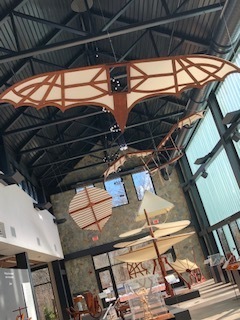 There are many versions of Leonardo’s gliders. Early Leonardo da Vinci gliders had an articulated wing with a system of belts passing between the thighs and around the body of the flyer. He later reduced the structure to a simple form with wings directly attached to the human body. A glider based on this drawing was successfully flown by the paraglider Robbie Whittall in England in 2002. After 40 crashes, a tail was added which allowed him to make it fly properly.