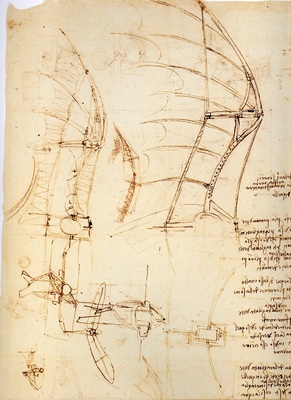 Leonardo was obsessed with the possibility of humans flying using flapping wings like birds. Such a machine is called an ornithopter,and is one of Leonardo’s most recognizable designs for a flying machine.  Leonardo could not entirely let go of the notion of flapping as a means of propulsion. His studies on the possibilities of flight were shaped by the idea that man’s own muscle power sufficed to imitate the flight of birds. For this reason, he conducted a number of experiments based on a design that could never be realized: a machine propelled by flapping wings (based on the anatomical designs of bird and bat wings). It was only later that he drew up designs with stationary wings.