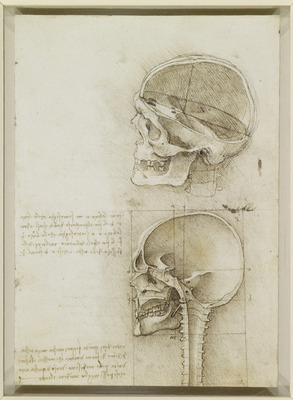 It is in this area of study that the conviction and courage of Leonardo stand out. At this time the Vatican denounced any unholy practice, such as the cutting up of bodies. Indeed, they considered Leonardo’s work bordering on witchcraft and heresy, especially as his notes were written in what was considered a strange scripture, his mirror image writing. The Vatican eventually forced Leonardo to stop this practice around 1512, and many of his 200 sketches were lost, only to be rediscovered many years after his death.

Leonardo’s formal training in anatomy of the human body began with his apprenticeship to Verrocchio, his teacher insisting that all pupils learn anatomy to provide a better and broader understanding and appreciation in their art. As he became successful as an artist, he was given permission to dissect human corpses in Florence. Later he dissected also in Milan and in Rome. From 1510 to 1511 he collaborated with doctor Marcantonio della Torre. Together with Dr Marcantonio, he planned to publish a theoretical work on anatomy with more than 200 drawings. However, this book was not published until 1580 (long after his death) under the heading “Treatise on Painting.” Leonardo dissected 30 male and female corpses of different ages.

He not only studied the anatomy of humans, but also of other beings, dissecting many birds, cows, monkeys, bears and frogs, comparing in his drawings their anatomical structure with that of humans. It is important to note that he was not only interested in structure but also in function, so he was anatomist and physiologist at the same time.

Leonardo would closely observe and record the effects of age and emotion on the physiology of people, in particular the effects of rage. In fact, it is widely reported that it was Leonardo who first discovered atherosclerosis or hardening of the arteries.

Today’s medical profession has links back to Leonardo da Vinci, with his precise groundbreaking anatomical drawings, his physiological investigations, and his research into the effects of ageing.