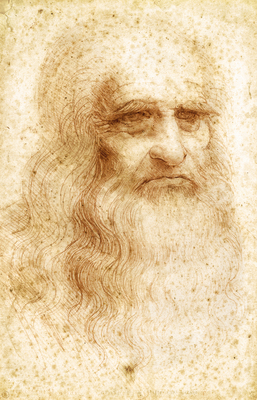 Leonardo was born April 15 1452 in the town of Vinci, the illegitimate son to a notary, Ser Piero, and a peasant woman – Caterina. He lived with his father and step mother until the age of 14 when he was apprenticed to one of the most esteemed artists of his day, Andrea de’ Cioni, known as Verrocchio, in Florence. Leonardo did his apprenticeship from 1466 to 1476. He worked with other famous painters in this Workshop such as Perugino and Botticelli. From 1476 Leonardo set off in his quest to learn everything there was to know. He was not an educated person in what was typical of the day. He did not learn Greek or Latin, or to read or learn from books. Instead he learned through the power of observation and experience, a trait he applied in everything he did for the rest of his life. His way of recording what was happening in his world was to draw and sketch. His final years were spent in Paris at a residence next to King François the First. The King gave him the title of First Painter, architect, and mechanic of the King. The King left Leonardo to do as he pleased, which meant he did no painting except to finish off some work on the Mona Lisa. He spent most of his time arranging and editing his scientific studies.