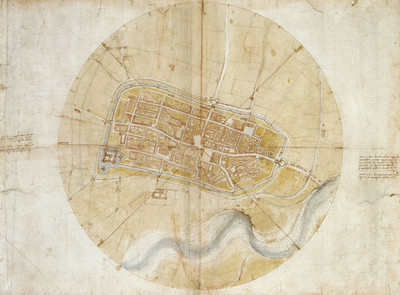 Florence and Italy during Leonardo’s lifetime were a difficult and dangerous place to live. Florence was ruled by the Church and the ruling class including the Medici Family. Any thinking outside what was taught or believed by the Church was considered witchcraft or heresy. People were encouraged to conform to the teachings of the Church, its beliefs and values. This era is known as The Renaissance (a time of rebirth and massive cultural upheaval which lead to huge advancements in music, art, science and education, which challenged the conventional wisdom and thinking of the time). Florence is considered by many historians to be the birthplace of the Renaissance Movement during this time. War and violence was common and warlords ruled districts in a violent and possessive manner. Public executions were common. Males dominated every aspect of life, whilst women lived a subservient existence. Life expectancy for the poor was short, and outbreaks of the Plague still killed thousands every year.

Art was the centerpiece of the Renaissance, with many art workshops pursuing new approaches and techniques. In those days, artists were artisans and hence required a wide range of technical exposure to a range of skills including sculpture, painting, frescos, clay modeling and even upholstery.

In those days cameras were not invented, so artists were in high demand to capture family portraits and “now” moments at family events, gatherings, and festivals. It is through art that history captured these moments in time. Not like today where we have technology to capture moments on camera, video, film and mobile phones.