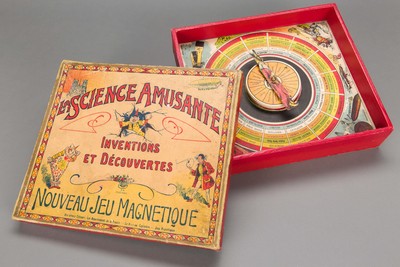 Hi there! My name is Nick Williams, the Assistant Curator here at The Bakken, and I've found a cool artifact in our vault I'd like to share with you.  It's a game!

With a simple spin, children and adults alike tested their scientific knowledge. The object of the game is to match the name of the scientist to the invention or discovery the wizard-shaped spinner lands on. This hundred-year-old French board game, called “La Science Amusante”—or “Fun Science”—gave folks a way to learn about science and quiz each other while having fun playing a game. Just like today’s version, Trivial Pursuit, people have been using games to learn more about scientific ideas for centuries.

In fact, that’s the whole idea behind the static electricity games Ben Franklin and his friends played in the 18th century—it’s fun, but also a great way to learn something new!