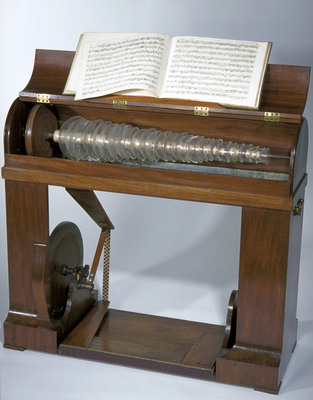 Hello, my name is Adrian Fischer, the Curator of Exhibits and Collections here at the Bakken.  I would like to share with you more about the glass armonica referenced in this case.

Among his many interests and talents, Benjamin Franklin enjoyed music and developed an instrument called the glass armonica. It works on the same principle as musical glasses, a popular 18th century entertainment, but is more convenient because it never needs tuning. The eerie music of the glass armonica was also used in healing sessions conducted by Franz Anton Mesmer during the heyday of his theory about Animal Magnetism. When French king Louis XVI put together a commission to investigate Mesmer’s healing claims, Benjamin Franklin, along with Antoine Lavoisier, Paris mayor Jean Bailly, and Dr. Joseph Guillotin, were among the members. In 1784, the commission found that Mesmer’s Animal Magnetism does not exist, and the glass armonica lost popularity.

A few years later, in a dramatic turn of events, Lavoisier, Bailly, and Louis XVI were beheaded by Dr. Giullotin’s latest invention, the guillotine, during the French Revolution.