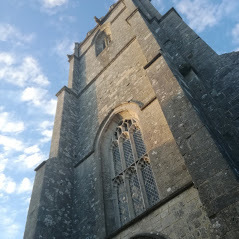 You should now turn to face towards the tower.

Behind the wooden screen at the base of the tower is the choir vestry and sympathetically added kitchen and toilet facilties neatley hidden.

There is also a small door leading to a winding staircase that runs to the top of the tower some 84 feet or 25.6 metres above.

The tower istself is spilt into four stages and served as a landmark for sailors in ancient times.

When you have finished the tour take some time outside the church to have a look at the majesty of the tower and the gargoyles that surround its upermost stage.

The gargoyle on the south-west corner appears to be holding a shawm-like instrument, while the one in the centre of the north battlement is that of a women in medieval head-dress with a monkey peeping between the horns of it.

When ascending the tower by the winding staircase, the first thing you come to is the ringing chamber. This is where the bell ropes hang and where the ringers ring the bells from.

If you carry on up the staircase the next level is the bell chamber where the current eight bells hang.

There have been bells in All Saints church dating back to its consecration in 1455 , when the four bells that hung within the tower were blessed by Bishop Beauchamp.

In 1522 the bells were confiscated by the crown.

In 1802 the great bell (3rd) was taken down to be cast into a smaller one as it was in need of repair and it was decided that the repair would be too expensive.

In 1891 the bells were recast into the present ring of eight bells by John Taylor of Loughborough.

The bells were completely renovated and rehung in 1946.

There is an enthusiastic band of ringers who practise weekly on Tuesday evenings and ring the church’s eight bells before the main Sunday service.

The treble (the lightest bell) weighs 4½ hundredweight; the tenor (the heaviest) over 16 hundredweight (0.8 tonne).

the winding stiarcase then carrie on up until the top of teh tower where fantsatic views can be seen fro miles around towards Portland Bill in the South and Hardys Monument in the North.