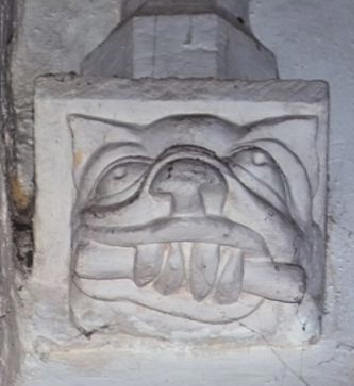 You should now be back in the middle of the church.

As you look around the church along both the north and south aisle walls there are many carved heads or corbels. Some of the corbels come from the building the previous church replaced. There is an interesting one in the south aisle to the east of the main door. it is of a workman carrying a stone masons hod, and gives a good idea of the dress of the period.

Another one on the nave side of the south arcade is of a mason carrying a masons tool. On the north wall by the organ is a corbel of a head wearing a crown and it could be the head of the regining monarch of the time of the building of the previouis church.

By the tower arch, on its north side, is a very interesting corbel. It is much older than any of the rest. It represents a dog with a bone in its mouth and is so primitive in its style that the two canine teeth of the top jaw fall in between the two corresponding teeth of the lower jaw. The bone is therefore held by four teeth placed, one bottom one, one top one, one bottom one, one top one.

No dog then or at any time since, or since the beggining of time has held a bone this way.

This corbel is probably Norman and is the sole evidence remaining that a Norman church once stood on this site. The erliest written evidence providing mention of a church in Wyke Regis dates back to the year 1171.

The first recorded rector of Wyke Regis was Nicholas Lungspe who was appointed in the year 1263. Nicholas went on to be Bishop of Salisbury. He was very fond of Wyke Regis and when he died he left money in his will for the relief of the poor of Wyke Regis.