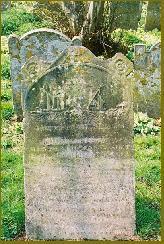 There are some fascinating headstones in the graveyards around the church and some well known local personalities have been buried there over the years.

One of the most famous in the graveyard on the north of the church, is the artist John William Upham who painted so many delightful scenes of Wyke and the surrounding areas in the early 1800’s.

The architect William Hamilton is also buried there.

In the graveyard to the east of the church there is a memorial to scientific pioneer William Thompson who took the world’s first underwater photograph in the locality. This garveyard has had most of the headstones cleared and placed around the outside of the plot to make it more of a park, although William Thompson's memorial still stands in its original position

In February 2005 a memorial was erected inside the church adjacent to the North Door, it is in memory of John Wordsworth, who was the brother of the poet William Wordsworth. The memorial mark's the 200th Anniversary of the sinking of the Earl of Abergavenny of which John Wordsworth was the captain.

William Lewis was aboard the smuggling ship the "Active" when it was chased by a Revenue schooner the "Pigmy".

A shot from the "Pigmy" struck and killed William, reportedly after the "Active" had already surrendered.

William Lewis is reputed to have provided the inspiration for the novel Moonfleet written by John Meade Falkner which was set on this coast.

The inscription which has now faded, reads:

Sacred to the memory
Of
William Lewis
who was killed by a shot
from the Pigmy Schooner
21st of April 1822 aged 33 years.

Of life bereft (by fell design),
I mingle with my fellow clay.
On God’s protection I recline,
To save me on the Judgement Day.
There shall each bloodstained soul appear,
Repent ah! Ere it be too late,
Or else a dreadful doom you’ll hear,
For God will sure avenge my fate.

Now move forward to where the pews end, and you are once again between the South and North doors.