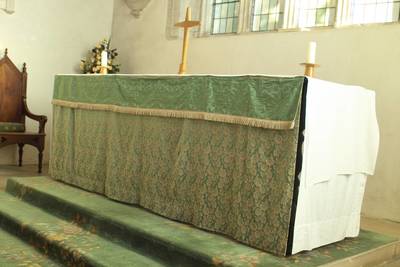 You are now stood in front of the High Altar.

Originally the High Altar stood against the east wall with nothing behind it, and the east window as now, showed up in all its fine proportions.

The original Altar was of stone. A stone Altar of this type was called a mensa, and many were ordered to be removed at the reformation.

In 1859 when the chancel was shortened, this altar stone could be seen laid in the floor of the church with the consecrated crosses still observable. Now alas, it has vanished. The present wooden altar table was a gift from the Reverend E Thurston who also presented a cross and candlesticks which he brought from italy, which were stolen many years ago.

Processions formed a large part of medieval worship and to facilitate this a west door was constructed in the tower so that the processions could leave the chancel, move through the nave, go out through the west door and circle the church from north to south and re-enter the south door. The west door was however blocked up many decades ago.

The priest vestry door is to your left when facing the High Altar.

The current priest's vestry has a hagioscope - a V-shaped slot that enables anyone kneeling in prayer on the floor of the vestry room to see the sacred elements on the altar.

The vestry was once known as ''The Bones Room'' because it was the custom to store in there any bones found when digging new graves in the churchyard.

In medieval times bodies were not buried in coffins and the graves were only some three feet deep. Wyke Church was also given to inside burials and eventually - outside and inside - the dead lay end to end and side by side.

The Victorians decided to stop this practice and the church floor was covered by a layer of concrete. The contents of the Bones Room were reburied in a mass grave near the Old Rectory in 1870.

The Church Registers date back to 1610 and the Church Wardens Accounts are almost as old. They are now held in the Dorset History Centre at Dorchester.

The Church Wardens' Accounts from 1745 to 1803 indicate how much the villagers depended on the crops they grew to survive and how determined they were to protect them from wild birds and animals. During the year of 1772 the churchwardens paid out rewards to villagers for five foxes, 12 hedgehogs, 9 dozen sparrows and two badgers. The going rate for a fox was 6 pennies, and 2 pennies for a dozen sparrow heads.

To your right is the small priest's door on the south side of the church, nearest to the Lychgate. This was used to enable the priest to enter the church without passing through the crowds in the nave, which was used during the week by the people of Wyke for meetings, elections, wedding feasts and even dancing and fairs.

Turnaround to face the tower, and walk down the church to stop half way down the section of pews and between the heads of Henry the sixth and Margaret of Anjou.