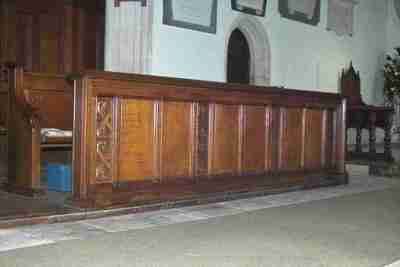 The Chancel and Choir

You are now stood at the chancel steps.

At either side of the chancel steps are the lectern and pulpit.

The lectern is in the form of a brass eagle, its outstretched wings to support the bible, and carrying the good news over the world beneath its feet.

The teaching ministry of the church is exercised from the stone pulpit opposite.

The choir stalls in front of you on either side, form a memorial to those from the village killed in the Second World War, some of whose names are carved in the centre panels of the left hand pew.

The present Lady Chapel on your right was furnished as a memorial to Edward Whitby a priest who died in 1948. He was not a preist who served Wyke Regis but belonged to a family who took a great interest in the parish. The Lady Chapel was designed by Walmsley Lewis and contains in the altar top a square slab of stone.

In the south wall in the lady chapel is an aumbrey set into a piscina where the reserved sacrement is kept, for taking to those who are unable to attend church. The aumbry was givenm in memoru of Canon Pratt, who was Rector of the parish from1942 to 1967. The sacrements presence  is indicated by a continuosly illuminated lamp housed in the hanging sanctury lamp.

To your left is the Organ. The organ is a Henry Jones & Son, two manual pipe organ, originally built in about 1884.

It was first restored by George Osmond and Co of Taunton in the 1960s and improved an enlarged by John Budgen of Warminster in 1993. A further restoration/rebuild project was undertaken in 2017. It is a magnificent instrument and is used to accompany the all services and functions held in the church.