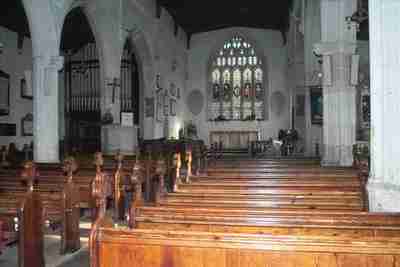 You are now stood in the Nave of the church.

As you stand between the two doors,  turn to face the altar at the east end of the church. you get a good sense of the proportions of the church. You can appreciate the perpendicular style, with its slender columns, pointed arches and plenty of light – note the large east window.

In general the church as you see it, is the church which was consecrated on 19 October 1455. However, it would have seemed very different then. For one thing, there would have been no pews, just some benches against the walls for the elderly. During the week, the nave – the area where the congregation now sits in the pews – may well have been a busy meeting area for parishioners. Also the chancel was originally enclosed by an ornate carved wooden screen stretching between the pillars by the chancel steps and also by a parclose wood screen between the choir bays on the north and south. These were removed after Henry VIII’s Reformation of 1536-39 and the chancel screen was used to construct a wooden reredos behind the High Altar. This reredos was subsequently removed and its whereabouts is unknown.

In common with most parish churches, All Saints’ had three altars: two where the present, modern ones stand, the third where the organ is.

Continue looking to the altar at the east end of the church.The two heads, facing each other across the nave from their respective pillars, are the king and queen when the church was built. They are King Henry the sixth on the left and on the right his queen, Margaret of Anjou.

Now look back towards the main door again.

There are two royal coat of arms in the church.

Now look back to your left and to the carpeted childrens area adjacent to the south door.

The painted Royal Coat of Arms on the north aisle west wall, which commemorates the restoration of Charles the second in 1660, was put up in 1714 by order of George I and displayed his Coat of Arms.

King George the third attended this church during his summer visits to Weymouth during the years 1790 to 1805, and hopefully he did not notice the cheeky change.

Also close to the main door is the font which is used for baptisms.

This is perpendicular in style, of the same date as the church. So many thousands of babies, and a good numbers of adults, too, have been baptized into the Christian faith in it. The font originally stood in the nave between the two doors where you are now stood.

Now walk forward towards the altar. Stop at the chancel steps in front of the choir stalls.