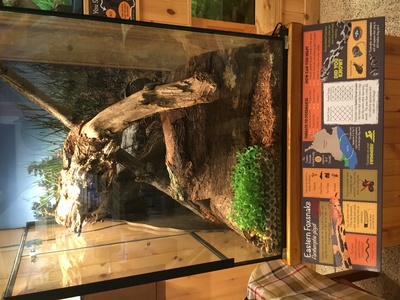 The Eastern Foxsnake is the largest snake in Rondeau averaging at around 4 feet.

They can be found in only 3 regions in Canada and live in pastures, sand dunes, farm fields, and marshes.

Foxsnakes are named after the 'foxy smell' they emit when they feel scared, not because of their similar colour or because they eat Foxes.

They will also vibrate their tails if they feel threatened, which usually leads people to misidentify them as rattlesnakes.

Contrary to popular belief, Foxsnakes are not venomous!

They are very docile and rarely bite.

Foxsnakes have keeled dorsal scales - this means their scales have a ridge down the centre rather than being smooth.

This gives them a more dull, non-reflective appearance that helps with camouflage.

So it's important for you to remember to brake for wildlife and inform us if you find one in the wild.