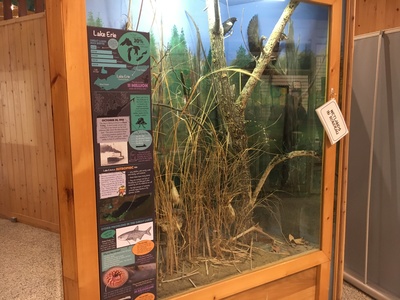 As you have heard previously, Rondeau is a landform that juts out onto Lake Erie.

Lake Erie is the shallowest of the great lakes, being that its maximum depth is 64 meters.

Since Lake Erie is the shallowest of the Great Lakes it is therefore the roughest and the most unpredictable! It is prone to very sudden, severe storms, usually in Autumn.

On October 20th, 1916 a storm swept across Lake Erie that is now known as the most infamous killer storm the lakes have ever seen.

The storm consisted of three converging pressure systems that resulted in 75 mph wind gusts - speeds similar to that of a mild hurricane.

This day in history is known as Black Friday.

The storm claimed the lives of 52 sailors and ironically the two survivors were both captains.

Lake Erie is classified as a Eutrophic Lake.

These types of lakes posess the following features:

Due to the amount of pollution that exists in the area, Lake Erie was considered dead in the 1960s and 1970s.

So much so, that Dr. Seuss compared the fate of his fish in The Lorax to the fate of Lake Erie.

Since then, the lake has rebounded and is now considered to be a success story.

The lake is also home to many invasive species including Asian Carp and Sea Lamprey.

Each of these species cause widespread damage to the natural ecosystem of Lake Erie, including rapid reproduction resulting in food shortages for all species.