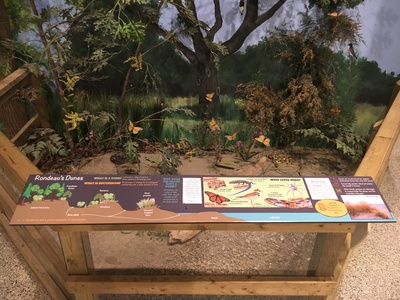 As mentioned previously, Rondeau was formed by two currents meeting together and depositing all of the sediment that they were carrying.

This process was the start of succession, the process by which the living organisms on land die and produce soil capable of growing new living things.

Succession continues to this day and still affects the shape and landforms of our park.

Some of the landforms that are affected are called dunes.

Dunes are large mounds or ridges of sand formed by wind.

The dunes are home to many species including the Five-lined skink, Fowler's Toad, and Monarch Butterfly.

Dune habitats are also home to many plant species including Marram Grass and Horsetail, which act as pioneer species for the beginning of succession.

Dunes help to protect our land and Rondeau would not be the same without them!