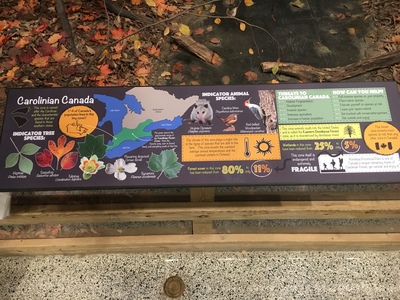 Rondeau is a very special place, because it is situated in the Carolinian Zone.

The Carolinian zone is a climatic zone named after the Carolinas and the species that are found within those southern states.

Rondeau is situated in the Northern part of the zone, but it stretches further to Grand Bend and Toronto.

The Carolinian zone boasts the warmest average annual temperatures and the warmest winters in Ontario!

Even though this zone is spectacular it is also endangered and extremely fragile.

These percentages translate into the zone protecting more species at risk than any other in Canada.

Rondeau Provincial Park is one of Canada's largest remaining tracts of Carolinian Forest, get outside and enjoy it today!