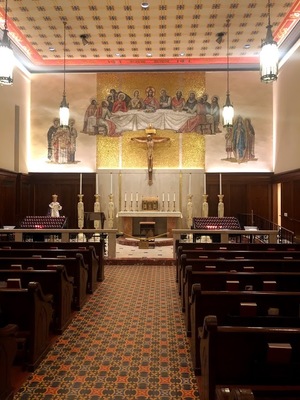 The Blessid Sacrament chapel is separated from the west side of the sanctuary by decorative wrought-iron, featuring a cross and sunburst.

Hugo Ohlms designed the chapel around a Eucharistic theme, suitable to the place where consecrated hosts are reserved after Mass. Jewelry contributed by parishioners provided gold and gems for the tabernacle, which was crafted in Ireland by Gunning and Son, LTD.

Its shape and adoring angels suggest the Ark of the Covenant.

On either side of the altar are large candlesticks on which are carved angels bending in homage.

Above the altar, a mosaic depicts the Last Supper, the first Eucharistic meal. It was executed by the Gregorini Studios, in Venice, Italy.

Surrounding Saints are linked to the Eucharist, Mary as our Lady of Guadalupe, and Saint Clare of Assisi, on the right side. Thomas Aquinas, Pius the tenth, and Saint John Vianney on the left.

A crucifix connects the Eucharist with Jesus' sacrifice on Calvary.

Sacrifice is the theme of the three stained glass windows made by Rambusch Studios in New York.

The left window depicts Old Testament images, Melchizedech offering bread and wine on behalf of Abraham, and a sacrificial lamb.

Calvary appears in the New Testament window on the right.

The center window honors Vatican Council Two, and Pope Paul the 6th and his encyclical on the Eucharist, Mystery of Faith. It also depicts Saint Peters basilica and an airplane marking the modern era.

For the next stop please walk over to the opposite side of the cathedral to the east transept, and stand in front of the first pew.

Then play the next stop.