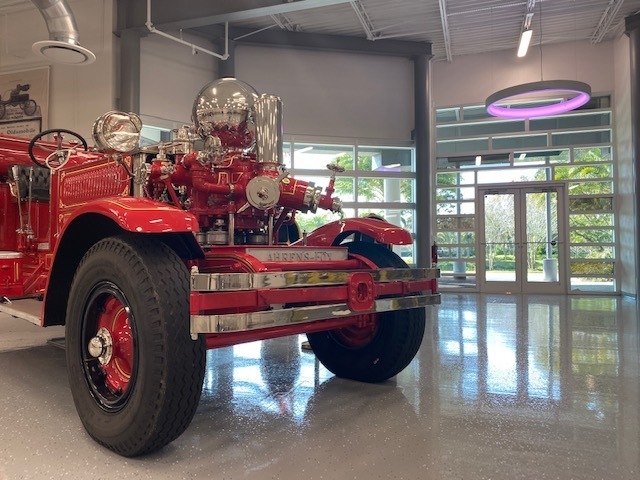 This Ahrens-Fox NS-4 was supplied new in 1928 to East Providence Rhode Island and remained in service until 1986. It was one of the biggest and most powerful of the Ahrens-Fox piston pumpers. The NS-4 is one of three fire trucks built with the P Model engine, a 1200-cubic-inch engine which is rated 140 horsepower. It is believed to be the only survivor of those three. This fire truck has undergone an extensive restoration under Steve Litten and his team of expert restorers. More recently, Alec Davis restored the monitor, which is the truck mounted nozzle fire fighters attached to the hose to provide a "high-flow fire stream for a quick knockdown." From engine, clutch and pump, to the original paint scheme with real gold leafing and pinstripe details, the 1928 Ahrens-Fox exudes all the beauty and power of its original state, and still maintains the ability to pump water efficiently. The large sphere regulates the pressure created by the pistons, allowing water to flow in a steady stream. The Model “N” was the most popular model produced, the “S” referred to the shaft drive, and the numerical suffix “4” denoted pump and hose with booster tank.