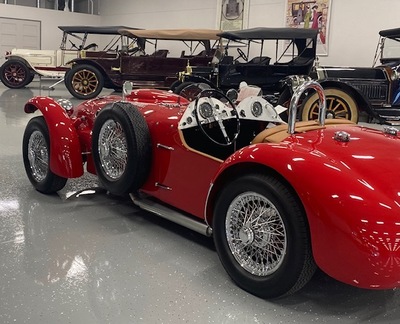 Sydney Allard founded the Allard Motor Company in southwest London in 1945. The son of a Ford dealer, Sydney early on recognized the importance of combining European chassis with potent American engines. Allard chassis were shipped to the United States hollow vessels to fill to the brim with American power. Upon arrival an engine would be mounted, a Cadillac or other big V8 or V12, melding Sydney Allard’s sporting British design style with the breadth and brawn found in the growling American V-8 engines.

The J2 was the answer to the “sports-car starved” American market of the late 1940s and early 1950s. By 1950 the J2 had already become a highly competitive international race car, and by 1957 J2 race cars had earned forty first-place finishes.

The Allard J2X is the most famous of the J2 automobiles, and a mere 83 were made between the years of 1951 and 1953. They were light and powerful, with a “cigar-shaped body” which frequently propelled drivers to racing wins, and nearly always required drivers to tame their “wild handling.”

The 1952 J2X was acquired in 1969 by Alan Beall of Southern California. In 2010 the car was completely restored by Steve Dennish of Limeworks Speed Shop. A custom V8 was placed beneath the hood; a Cadillac with forged pistons and custom-ground camshafts. A Lincoln-Zephyr transmission delivers 255 horsepower to the rear wheels. The running gear and body panels are original. Racy red paint and Brooklands windscreens provide a classic sportscar appearance.

The J2X was more recently received by the Muckel Collection, where it was updated with tan leather upholstery and correct original gauges. The “pinnacle of 50s race cars,” the J2X now resides at The Collection on Palmetto in Clearwater, Florida.