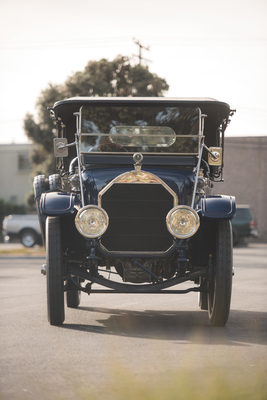 Considered the finest automobile in the country at that time, the Pierce-Arrow was widely accepted as the premier American car. Pierce-Arrows were extremely expensive. The 1913 Pierce-Arrow Model 48 is a five-passenger touring car powered by a T-head gas engine. It is the only known example of an early Pierce-Arrow to have an aluminum skin over hardwood body. Other Pierce-Arrow bodies of this era were of cast aluminum construction. The Model 48 sports conventional headlights, known as New York lights. After 1913, fender headlights became the standard for Pierce-Arrow.

A beauty in blue, the 1913 Pierce-Arrow features hand applied red pinstriping, button-tufted leather upholstery, and nickel-plated lamps and instruments. It was once owned by celebrated collector Jack Passey and was restored by Pierce-Arrow experct Eric Rosenau of Califonia.