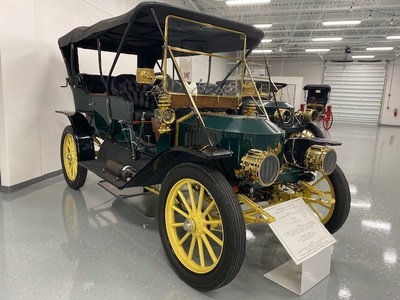 The 1910 Model 70 is a five passenger touring car that runs on steam. There are three pumps: one for pumping water into the boiler, one for pumping kerosene into the fuel tank, and one tiny pump for delivering steam cylinder oil into the steam line.The 1910 Model 70 was the last of Carl "Stanley" Amsley's restorations. It is said that 90% of existing Stanleys passed through Carl's hands. The chassis is made of ash wood. It has acetylene head lights and a right hand drive, like other cars of this era.The beautifully restored 1910 Stanley was previously owned by the Stanley Museum in Kingfield, Maine. It has been recognized and awarded titles and trophies in numerous car shows, including the Cranbrook Concourse d'Elegance in Michigan. Driven on tours all around the country, it continues to delight onlookers with its handsome good looks. Enthusiasm for Stanley Steamers abounds. Collectors around the world understand the significance of Stanley Steamers in automotive history, as well as the important contributions made by twins Freelan and Francis Stanley, the founders of the Stanley Motor Carriage Company. Jay Leno is a famous collector of Stanley Steam Cars, and can be seen driving a steamer up a mountain on an episode of "Jay Leno's Garage."