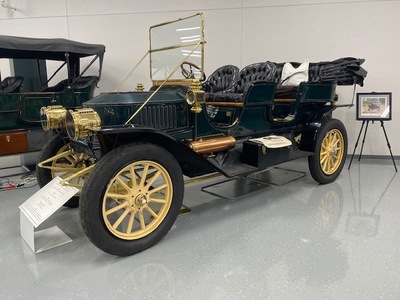 The 1910 Stanley Model 85 is a steam-powered automobile. It has a two-cylinder engine, as do all Stanley steam cars. A perfect car for traveling long distances, the 1910 Stanley Model 85 has successfully completed six transcontinental tours. It can hold 100 gallons of water and travel 100 miles before needing a water fill-up. Stanley steam cars are recognizable by the barrel shaped hood, under which resides the large boiler. The front of the cars resemble coffins. As such, they have been called coffin-nosed Stanleys. Fully elliptical leaf springs, large wooden wheels and generously padded upholstery ensure a pleasant ride. Steam cars are by nature quiet and dependable. With their many gauges, fuel jets, pilot light and plumbing, modern drivers might not think Stanleys very user friendly, but steam cars outsold gasoline cars in the early 1900s. They were quiet and reliable, and they required only water and kerosene to run. They didn't have to be hand cranked like early gasoline cars, and people at that time were quite familiar with steam. It is no wonder the Stanley Steamer has become known as the quintessential American Steam Car and has been featured in popular media, including Disney's classic animated film, "Cars."