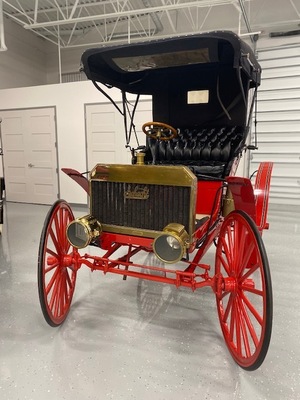 Here is an automobile in the style of a horse-drawn buggy, called a high wheeler. The Schacht Manufacturing Company of Cincinnati, Ohio marketed their creation as the "Invincible Schacht Runabout." With their large wheels, Schachts could easily navigate unpaved, potholed or rural roads, much like an old-fashioned wagon. The sixteen spoke wheels easily pull through mud and sand, as per Schacht's promotional literature, and the motor's power, reliability and ease of starting "cannot be excelled." Happy red paint atop a Corning style body was standard. Schacht produced 8,000 automobiles from 1904 to 1914 and continued thereafter producing trucks and fire trucks until 1940. In 1936 Schacht bought the Ahrens Fox Fire Engine Company.