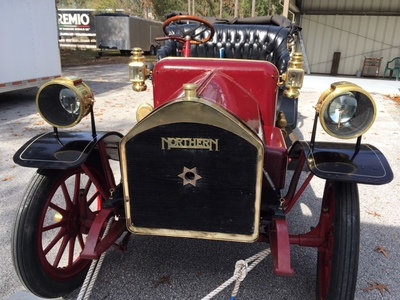 “Silent as the Stars,” the 1907 Northern is a five-passenger touring car that came with lamps, mats, a horn, and tools. The top was an optional accessory. In 1907 Northern proudly advertised its car as the highest-priced two-cylinder ever offered, a claim, Northern stated, which could not be made were it not for the great value offered by the brand. The Northern's engine is a two-cylinder, horizontally opposed gas engine mounted crosswise under the hood. A direct shaft drive is used instead of a chain drive, a technology which Northern was among the first to utilize. Northern was also among the first auto makers to adopt left-hand steering, though some car makers wouldn't make the switch until the 1920s.