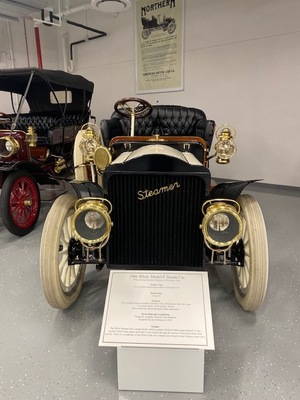 The White Model F Steam car has a two-cylinder engine that is mounted vertically. There is a condenser on the front of the car which recovers and recycles exhaust steam, extending the car's range. It has brass hardware, black, buttoned leather upholstery and acetylene lights. White steam cars were expensive and well-appointed.

It was a White steam car similar to this which in 1909 was used by President Taft. President Taft was the first president to be officially transported by automobile rather than horse and carriage. He even converted the White House stables to garages. And even before the 1909 White was  adopted for use by the White House, another White steam car was used by the Secret Service to follow Theodore Roosevelt's horse-drawn carriage.The White Sewing Machine Company, later called the White Motor Company, was founded by Thomas H White. His son, Rollin White, improved the boiler with his special water tube design that allowed for the superheating of steam. Rollin patented the design and even sold it to Locomobile.