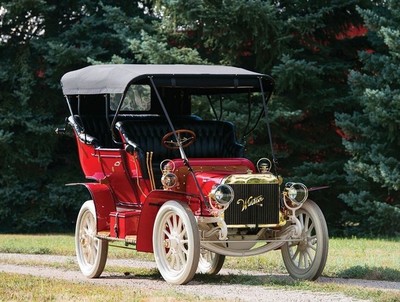 The 1906 Winton Model K is a gas-powered, four cylinder automobile which was featured on the oceanfront greens of the prestigious Pebble Beach Concours d'Elegance in 2010. The 1906 Winton has lively brass lighting and instruments and a brass bulb horn. It has semi-elliptical leaf springs and mechanical drum brakes. The very first car to drive across the country was a Winton, driven by Dr. Horatio Nelson and chronicled by PBS in their film, Horatio's Drive. Alexander Winton, who founded the Winton Motor Carriage Company, was a pioneer in using racing to promote his automobiles. One of his first races was against Henry Ford. He lost that race, but he went on to build more race cars, all named Bullet. Bullet number 3 was driven by famous race car driver Barney Oldfield.